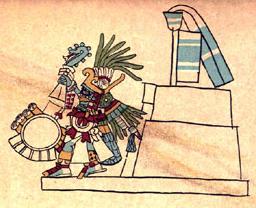 Huitzilopochtli Standing in Front of a Temple (Codex Borbonicus, plate 34)

Huitzilopochtli, or “The Hummingbird on the Left,” was one of the most important gods to the Aztecs, particularly the Mexica of Tenochtitlan. He is best known as a god of war and the sun, though he is far more complex than that. He appears in several myths as a brave guardian of those under His aegis, such as His defense of His mother, Coatlicue, from Coyolxauhqui the Moon Goddess and the Centzon Huitznahua, the Stars of the South, and His protection of the Mexica on their journey south to the site of Tenochtitlan. In His guise as the Sun, He gives warmth and light to the earth so that life may exist. Thus, not only does He destroy, but He creates new things in the place of the old and preserves the larger system that contains all that is. He is Order and Chaos, Life and Death all in one, a recurring pattern among the high gods of this pantheon.

We can get an idea of His personality from the myths as well. He is fierce of course, shown by his relentless destruction of all but a lucky few stragglers of the Centzon Huitznahua even after They realized that they couldn’t defeat Him and begged for mercy. He is also loyal and loving towards those He considers “His,” as shown by His spirited defense of His mother and the Mexica — this characteristic earned Him the title of “Protector of Men.” Often described as the “Portentous One” who’s always rushing about, He’s full of wild energy and exuberance. This energy and ferocity is tempered by an inner resolve and clear head, as shown by His calm bravery even when outnumbered by the army of the Four Hundred Southern Stars or faced with His sister’s deadly sorcery.

The Battle of Coatepec: Huitzilopochtli Defeats the Moon and Stars

This is my retelling of the important myth about Huitzilopochtli’s birth and how He protected His mother, Coatlicue, from Coyolxauhqui and the Centzon Huitznahua at Coatepec.

My retelling of the legend where Huitzilopochtli spoke to His people while they were still wandering Chichimec nomads living in Aztlan, telling them to head south to the site of Tenochtitlan.  I took a fair amount of poetic liberty with this one, since this event generally gets just a couple of lines in the original sources, so I fleshed it out a fair bit with more detail I believe stays true to the spirit of the myths in general.

This story takes place pretty much simultaneously with “First Steps From Aztlan” above.  In it, Huitzilopochtli bids Coatlicue farewell, and receives a prophecy from Her.  This is another one I took a fair bit of liberty with to flesh out, as the only instance of it I know of in the original sources is actually as a brief reference by Coatlicue in another story altogether.  Still, there was enough there for me to work with and fit into the timeline as it happened.

In this myth, I recount the conflict between Huitzilopochtli and His malicious sister, Malinalxochitl.  Accompanying the Hummingbird on the Left and the Mexica, She’s been tormenting the helpless mortals, until Her brother loses His patience with Her ways and puts a stop to Her evil games…but Malinalxochitl’s plans for revenge have just begun.

Incarnations of the Aztec Supernatural: The Image of Huitzilopochtli in Mexico and Europe

Elizabeth Hill Boone’s excellent monograph on Huitzilopochtli. The only full-length English study of this particular god available at this time. The American Philosophical Society has generously allowed Google to scan and host it for the public to read, though it may not be downloaded due to copyright.

Includes many artifact photos, pictures from codices, etc. Also includes other interesting tidbits on the god, such as His birthday (1 Flint Knife), his festivals, his sacred animals (the hummingbird and the eagle), and much more. They place Panquetzaliztli a bit later in the year than most calendar correlations I’ve seen, but that’s a minor quirk.

Grace Lobanov’s English translation from her Pre-Columbian Literatures of Mexico. The book is still under copyright and so you can’t read the whole thing, but fortunately this particular hymn in its entirety can be reached via Google’s Limited Preview.  This link will take you to the “About This Book” page.  Look for the “Search This Book” box, type in “Huitzilopochtli hymn,” and click on the link to page 65 that it will turn up.  That’s the song for the Portentous One.