Today I’m going to give a quick overview of the types of autosacrifice performed by the Aztecs during the days of the Empire in order shed some additional light on this very important religious practice.

Traditionally, the Aztecs would collect blood from their ears, lower legs (calf, shin, or just above the ankle), lip, tongue, or penis. The tools and methods used would vary depending on the worshipper’s preferences, the ritual context, and in at least some cases, the instruction of a priest.  The Florentine Codex records the rite of confession to Tlazolteotl, and according to Sahagun, the confessor priest would prescribe required penances to atone for the disclosed sins — these penances often included various forms of bloodletting.

The most common methods of getting the blood were by pricking the flesh with a sharp instrument. Maguey (agave) spines are the tool most frequently mentioned in the historical texts, though slivers of obsidian and special perforators made from a spike-shaped piece of sharpened bone were also used. (Incidentally, Quetzalcoatl, the First Priest, is often shown in the codices holding a bone perforator or two.) From what I’ve read, it seems that maguey spines were particularly associated with piercing the ears and the legs, probably because their large size would be sufficient to draw blood from the legs. The individual would pierce himself or herself in the chosen location, and once the thorns were sufficiently bloodied, would carefully arrange them on a bed of cut fir boughs, or stick them into a ball of dried grass.

Alternatively, the Aztecs would nick their earlobes with an obsidian knife, and the blood would be allowed to drip on the ground, be sprinkled into a fire, or flicked towards the sun, symbolically giving the life-energy to Tonatiuh.

Finally, there was a final type of personal blood offering, that of passing straws or cords through the body. This rather severe form of autosacrifice was a multi-step process. The person would first select a place to pierce. In the texts I’ve read, the tongue seems to be the most common choice for this kind, though the ears, legs, and possibly penis were used as well. (I haven’t the slightest idea of how that last one worked, it’s definitely not something the Spanish friars would’ve recorded the details of!) Then they would poke a hole with a sharp sliver of obsidian, and pull a number of straws or thin cords through the hole. This sacrifice was typically done in a temple or at the side of the road. Wherever it was done, the bloodied straws were left behind as offerings. Interestingly, this practice was apparently only done on days that had a proper sign according to the ritual calendar (tonalpohualli), but I’ve never come across what daysigns those were. Finally, this practice of drawing straws is usually listed as a priestly activity, not something done by ordinary people, though occasionally the nobility appear to have done it as well. Priests who did this often were obvious, as their tongues would be extremely scarred, damaged to the point where they were said to have had difficulty in speaking. 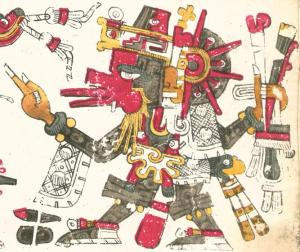 This is probably the first thing that comes to many minds when someone says the words “Aztec religion,” followed immediately by Hollywood horror movie-esque pictures of hearts being ripped out of chests. I’m going to get it out of the way now: yes, they did human sacrifice. No, that’s not what I’m going to be talking about here. Instead, I’m going to talk about the philosophy behind making offerings, or nextlaoaliztli in the Nahuatl language. I’ll talk about the “what” of offerings in one of my next posts.

Nextlaoaliztli translates roughly to “the giving of what is right/proper.” It has a strong sense of duty and a concern with “doing the right thing.” The right thing to the Aztecs was making offerings to the gods (Teteo) on a regular basis, of course. It was the lynchpin of their worship rituals. But why was it the right thing to do?

Well, it was right because it was thought that the gods gave things to humankind at the very beginning. They formed the world out of the primordial chaos by reshaping the Cipactli monster into the land, and gave life to people. Both of these acts came at a cost to the gods – Tezcatlipoca lost His foot to Cipactli’s hunger, and Quetzalcoatl shed His blood to bring life to the first man and woman. Not only that, but the Aztecs believed that many good things were created for them by the gods, such as delicious foods and drink, beautiful art and music, learning, and more. Since the Teteo had generously bestowed such favors upon humankind, it was only proper that humans should give gifts back to the gods. The concept of reciprocity and “one good deed deserves another” was central to the ethics of the Aztec people. Golden Rule on a cosmic scale, anyone?

Sacrificing the right kinds of things was also the correct thing to do because the gods were thought to need some of them, like blood. Blood contained vital power, called teyolia, which was thought to strengthen the gods who received it. Since the gods not only created the world, but sustained it, sacrificing was a way of preserving the cosmos for all. Other sacred substances, like copal, were also viewed as food for the gods.

Offerings could also be payments. The Aztecs believed that the gods would answer prayers for assistance if They wished to, and They tended to expect gifts in exchange for Their help. The idea of “no free lunch” fits pretty well here. Of course, the gods could choose to help someone without asking for anything in return, but it was up to Them to make that choice. Anyway, in many of the ancient prayers we have preserved in various writings, such as in the Florentine Codex, you see people giving things to the gods when they want some divine favor, either up front or when the help was received. Sometimes blood was given, though material goods seem to have been very popular, especially sacred paper.

In closing, I think that we should all meditate carefully on the logic behind nextlaoaliztli and how this pattern of mutual gifting and obligation appears at each level of life, like the ever-dividing branches of a tree or the twisting arms of a fractal pattern.

That’s it for now for discussing the “Why?” behind sacrifice, next time I’ll talk about the “What.” Stay tuned!