The next story in the Mexican founding saga tells of the tyranny of Huitzilopochtli’s sister, Malinalxochitl (“Grass Flower”).  This myth follows after “First Steps From Aztlan” and “Leaving Coatepec,” and sets the stage for the birth of Copil and the further difficulties the fledgling Mexica face.

It had been some time since the Mexica had left their ancestral homeland of Aztlan, and they were wandering in the wilds of Michoacan, following Huitzilopochtli’s dream.  But the Portentous One wasn’t the only divinity accompanying them — His sister, Malinalxochitl, had come with them.  She was beautiful both in form and manner, graceful and elegant.  She was also a powerful sorceress, as she was a Huitznahua woman, one of the stars come to walk among men.  She could drive men mad, shake a river from its course, or strike her enemies dead with a glance.  For a time she ruled them on their wanderings, her flesh and blood guidance complementing unseen Huitzilopochtli’s directions in dreams and her magic a formidable force added to His strength.

Eventually, however, Malinalxochitl grew arrogant and tyrannical, forgetting her duty to guard her brother’s tribe.  She began to torment the Mexica in Huitzilopochtli’s physical absence.  She even forced them to worship her as a goddess on pain of death.

“How wonderful this is!” she thought to herself as she eyed the frightened people as they hurried away from yet another city that had grown unfriendly to them.  “They obey my every whim, and my brother stays silent.  Perhaps He’s abandoned them, or a rival god struck Him down while He roamed ahead.  After what He did to Coyolxauhqui, it would be a fitting end for Him.”

The priests and the people, however, secretly prayed to their silent protector.  “Huitzilopochtli!  Your sister has become corrupt, and instead of being a torch, a light for your people, she’s become a deadly tyrant!  Please save us!”

One night, Huitzilopochtli came to the eldest priest in his dreams.  “How dare my sister do this!  And using sorcery against My people – !” He raged.  “Very well then, we will get rid of her.  When she sleeps tonight, slip away and leave her behind.  If she wishes to behave like a treacherous scorpion, let her be alone like one.” The priest nearly wept with joy as the answer to his prayers.  “However, you must promise Me something — you must not follow her heart and copy her charms and spells.  That’s a coward’s way of fighting, and I won’t stand for my people to be seen that way.  No, instead you will win with courage and skill at arms!  That’s My way.”

The priest agreed, and when he awoke he told the god’s words to the rest of the tribe.  When it had grown dark, they packed up and slipped away into the night, leaving Malinalxochitl behind.

When she awoke, Malinalxochitl wailed in betrayed anger.  “Huiztilopochtli, you dog!  I’m not through with You or Your wretched people!  My sister and I will be avenged.”  Vowing to make them pay, the scorned Huitznahua woman went to make the nearby city of Malinalco her own and to bide her time to strike. 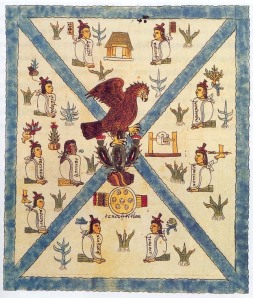