The next story in the Mexican founding saga tells of the tyranny of Huitzilopochtli’s sister, Malinalxochitl (“Grass Flower”).  This myth follows after “First Steps From Aztlan” and “Leaving Coatepec,” and sets the stage for the birth of Copil and the further difficulties the fledgling Mexica face.

It had been some time since the Mexica had left their ancestral homeland of Aztlan, and they were wandering in the wilds of Michoacan, following Huitzilopochtli’s dream.  But the Portentous One wasn’t the only divinity accompanying them — His sister, Malinalxochitl, had come with them.  She was beautiful both in form and manner, graceful and elegant.  She was also a powerful sorceress, as she was a Huitznahua woman, one of the stars come to walk among men.  She could drive men mad, shake a river from its course, or strike her enemies dead with a glance.  For a time she ruled them on their wanderings, her flesh and blood guidance complementing unseen Huitzilopochtli’s directions in dreams and her magic a formidable force added to His strength.

Eventually, however, Malinalxochitl grew arrogant and tyrannical, forgetting her duty to guard her brother’s tribe.  She began to torment the Mexica in Huitzilopochtli’s physical absence.  She even forced them to worship her as a goddess on pain of death.

“How wonderful this is!” she thought to herself as she eyed the frightened people as they hurried away from yet another city that had grown unfriendly to them.  “They obey my every whim, and my brother stays silent.  Perhaps He’s abandoned them, or a rival god struck Him down while He roamed ahead.  After what He did to Coyolxauhqui, it would be a fitting end for Him.”

The priests and the people, however, secretly prayed to their silent protector.  “Huitzilopochtli!  Your sister has become corrupt, and instead of being a torch, a light for your people, she’s become a deadly tyrant!  Please save us!”

One night, Huitzilopochtli came to the eldest priest in his dreams.  “How dare my sister do this!  And using sorcery against My people – !” He raged.  “Very well then, we will get rid of her.  When she sleeps tonight, slip away and leave her behind.  If she wishes to behave like a treacherous scorpion, let her be alone like one.” The priest nearly wept with joy as the answer to his prayers.  “However, you must promise Me something — you must not follow her heart and copy her charms and spells.  That’s a coward’s way of fighting, and I won’t stand for my people to be seen that way.  No, instead you will win with courage and skill at arms!  That’s My way.”

The priest agreed, and when he awoke he told the god’s words to the rest of the tribe.  When it had grown dark, they packed up and slipped away into the night, leaving Malinalxochitl behind.

When she awoke, Malinalxochitl wailed in betrayed anger.  “Huiztilopochtli, you dog!  I’m not through with You or Your wretched people!  My sister and I will be avenged.”  Vowing to make them pay, the scorned Huitznahua woman went to make the nearby city of Malinalco her own and to bide her time to strike.

This is the next part of the Tenochca founding epic, taking place at about the same time as the “First Steps From Aztlan” part of the story.  This part tells about Huitzilopochtli’s tearful departure from His mother, Coatlicue, as He sets out from Coatepec to lead the Mexica south.

This one is a little different from the other sub-stories in the saga, as it doesn’t come from the more usual sources of myth.  I know of this scene from an apparently Post-Conquest story that tries to shed some light on why the defense of the Aztec homelands failed, and why it seemed the gods abandoned them, especially their trusted patron.  In that legend, some of Motecuhzoma’s seers travel to Coatepec to bring Coatlicue a gift, and She speaks of Her son’s departure, and His prophesied return home to Her.  I’ve decided to break out Her reference to this event and tell it here, and save the other story for later.

Some time after the great battle against Coyolxauhqui and the Centzon Huitznahua, Coatlicue had begun to notice a change in Her son.  While once He had been content to stay close to Her side, now He had taken to wandering farther and farther away.  Sometimes She would notice Him gazing far to the south, the Land of Thorns, with an intensity that bespoke of great plans and ambition.

One day, in the Year of the Flint Knife, She watched Him staring off longingly at some distant southern land again, and She knew in Her heart that Her son was planning to leave.  “My beloved son…come to Your mother,” She said quietly.

In a moment, Huitzilopochtli had reached Her side with haste.  “What troubles You, Mother?”

“Son… I know Your heart is already in some place far to the south, not here at Coatepec.  Where do You plan to go?” She asked.

He paused a moment, glancing back to the left of the Sun.  “As usual, nothing escapes Your wisdom, my dear Mother.  I need to test My strength, to go on a grand adventure with My people, the Mexica.  I have seen it that We will conquer much and found a mighty empire for the glory of the Teteo.  How can I resist such an exciting prospect?” He poured out His heart with eagerness, already looking forward to the thrill the future promised.

Coatlicue smiled at the irrepressible spirit of Her son, yet this smile was tinged with sadness at the knowledge of their impending parting.  “Clearly, Your mind is made up to go, and go quickly.  I won’t stop You from going to meet Your bright destiny and seeking adventure.” Huitzilopochtli’s eyes lit up like the dawning sun.  Coatlicue went to a reed chest and pulled out a small bundle, pressing it into Her son’s hands.  “I have a parting gift for You.”

Huitzilopochtli unwrapped it partially, finding two pairs of new sandals within.  “One pair is for Your journey south, to the place in Your dreams, Tenochtitlan,” Coatlicue said.

“Thank you, Mother!” He replied, taking off His old sandals and putting on the new pair.  “But what’s the second set for?”

“They are for Your journey home,” She said softly.  “I’ve seen how the adventure ends, My son.  You will indeed conquer much, and achieve fame and wealth beyond measure.  But We both know that nothing lasts forever on Earth, not the shining quetzal feathers that will one day fade, nor the glittering gold that will turn to dust.  The same will be true of Your beautiful empire.  As You take land on Your way south, in the reverse order will You lose it, until at last the day comes when Your people will fall, and You will find Your strength exhausted.   When that dark day comes and you must don those sandals and bid the Mexica farewell, know that I will be waiting for you at the door with open arms to welcome You home.”

Huitzilopochtli nodded gravely.  “Thank You for Your wisdom and counsel, Mother.  Your words are more precious to Me than any of the riches I’ll capture.  I’ll keep them in My heart the whole time I’m away at war, until the day We meet again.”

With that, He gathered up His shield and Xiuhcoatl, His flaming serpent-spear, and tucked the second set of sandals into His bundle for the trip.  He embraced His mother one last time, and with a mixture of sadness and eagerness to see what the future had in store for Him, raced away from Coatepec.  He would not see Snake Mountain again for over two hundred years. 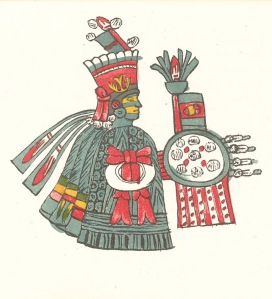