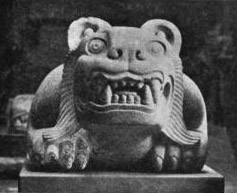 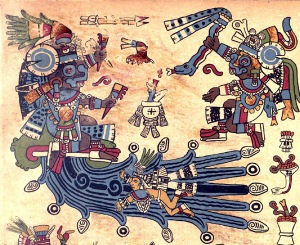 Introduction To The “What” Of Sacrifice

As I said in my previous post on the “why” of sacrifice, I’d be writing one soon on the “what.” Next time, it’ll be “how and when,” and we’ll be good to go on the basics of the cornerstone ritual in worshipping the Teteo.

The people of the Anahuac valley offered a wide variety of different goods and services to the gods. Most of them can be fit into three quick and dirty categories: blood offerings, property offerings, and services.

Blood offerings are the best known, and they come in several forms. There’s the classic heart extraction and other types of lethal human sacrifice, of course, but no one’s going to be doing any of those, so don’t even think about it. More important to modern-day practitioners, people would offer small amounts of their own blood to the gods. This is called autosacrifice, and everyone would do it, priest, king, and commoner alike. Finally, the last type of blood sacrifice is animal sacrifice. Quail were the most common choice, though I have found references to turkey hens and specific festivals where snakes, lizards, toads, and other small animals were offered. Anyway, quail offerings were mostly done by the priests and nobility, partially because meat was scarce and expensive in the days before the current style of large-scale industrial farming.

The second major category of offerings are those of property. The Aztecs gave a dazzling array of material goods to the Teteo, ranging from food and drink to clothing, incense, and art. Incense was the backbone of property offerings, and was burned for the pleasure of the gods very frequently. The particular type used was a resin made from tree sap, and is called copal. Copal comes in many different types, and has a wonderful sweet smell. I encourage you to check out one of the external links I have to an entire article on copal. Everyone would burn it, and its use wasn’t restricted to particular festivals or the like. Similarly, people would often offer flowers, and they weren’t just for the godesses. The gods like them too!

Different foods were offered, such as tortillas, tamales, amaranth dough cakes, and fresh vegetables like corn or chia. Drinks were also provided for the gods, especially a liquor called pulque or octli. Sometimes people would give well-made articles of clothing to the gods to show their devotion. Amate paper was often burned for the gods. This may sound strange to many people, as most of us in the West these days don’t exactly think of paper as sacred. Not so among the Aztecs. Paper was rare, expensive, and hard to make, so it was highly valued and reserved for religious use and the writing of sacred painted books, called Codices today. (FAMSI has a lot of them online that you can look at, check them out HERE.)

Speaking of rare, expensive goods, artwork and other related precious objects round out the list of property offerings. Excavations in the remains of the Templo Mayor (a.k.a. Huey Teocalli in Nahuatl, Grand Temple in English) in Mexico City have uncovered caches of beautiful art that were apparently given to the gods. The objects range from jewelry to statues to feathercrafts and harder to describe things. So if you have an artistic streak, this might be a wonderful way for you to make offerings. Beautiful feathers and precious stones (especially turquoise and jade) were also prized as offerings.

The last category is services, offering by doing stuff. Sweeping and cleaning was actually a devotional activity back in the day, as it was a form of clearing away chaos and decay. All sacred spaces were routinely swept, whether they were the imperial temples or the humble household shrine. Finally, music, dance, song, and poetry were often done for the enjoyment of the Teteo, and certain instruments were considered to be favored by certain deities. For example, the conch shell trumpet was linked to Quetzalcoatl, the flute was Tezcatlipoca’s preferred instrument, and I’ve seen a reference or two to the huehuetl, the big drum, being Huitzilopochtli’s instrument. Music and dance were very important ways to worship in Mesoamerica, and many of the festivals would culminate in most of the town gathering to dance and sing. Sacred dance is still done today, either as worship or for secular reasons of love of culture. Today it’s called danza in Mexico, and if you hit YouTube or GoogleVideo you can find recordings of some of the danzantes performing. Very beautiful!

That’s the end of this article exploring the kinds of things that were traditionally sacrificed. Next time, I’ll get down to discussing how and when to do some specific kinds of offerings.