I’ve been keeping an eye on the alleged human sacrifices in honor of Santa Muerte (Saint Death) in Nacozari, Mexico, since the news first broke a bit over a week ago.  Since the initial story hit, it’s been a rather vexing (if not surprising) slog through the misinformation and tedious sensationalism, with the usual suspects coming out of the woodwork to push a new version of the tired “Satanic Panic” trope.  I’m pleased to inform however, that a friend of mine, Joseph Laycock, just posted a story regarding the killings on the Religion Dispatches.  With his usual wit, Dr. Laycock deconstructs that bit of irritating nonsense, and provides a nice bit of work tracking how this meme is rapidly developing.  I highly recommend popping by and giving it a read.

If you’re wondering why I’m taking a moment to post news relating to human sacrifices offered to a Catholic saint, you might want to swing by Dr. Laycock’s other article on Santa Muerte.  Among other interesting data of note, he comments on the theory that Santa Muerte is a syncreticism of Catholicism with Mictlancihuatl (aka Mictecacihuatl), the pre-Columbian consort of Mictlantecuhtli and Queen of the Dead.  (Her names translate literally as “Lady of the Land of the Dead” and “Lady of the Deadlands People,” respectively.)  The first time I came across information relating to Santa Muerte, I had the exact same thought come to mind.  Both entities appear as skeletal feminine figures draped in sacred garb.  While Santa Muerte’s dress most obviously echoes a combination of Saint Mary (and by extension, the Virgin of Guadalupe, who is herself a syncretism of Tonantzin) and popular depictions of the Grim Reaper, her functions remind me far more of Mictlancihuatl.  Both grim ladies have power over material blessings and fortunes, as well as life and death.  This combination of dominion over material wealth and death is a signature of the Aztec earth/death deities (the powers of the earth and the force of death are inseparable in this cosmovision, when one gets to the root of it) such as Mictlancihuatl, Tonantzin, Cihuacoatl, and Tlaloc, among many, many others.  The offering of blood and human life to Santa Muerte seems to hint that at least some others see this connection between the new saint and the ancient goddess, the tragic manifestation of this understanding in the case of the Nacozari murders aside.

With that said, I do encourage you to check out Dr. Laycock’s informative articles on Santa Muerte HERE and HERE, and give the ill-informed and sensationalistic tripe from non-experts floating around on the web a miss.  Stay tuned for an upcoming post to stay with the subject of death while linking back to my prior post on the two major anthologies of Aztec poetry. 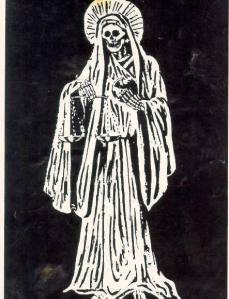 I was reading through the ninth volume of the Florentine Codex recently, and came across an interesting tidbit giving more information on some of the flowers offered to Huitzilopochtli.  Even better, Sahagun points out these flowers were offered during Panquetzaliztli!

What flowers am I talking about?  Well, it’s a particular kind of flower called a chimalxochitl, or “shield flower.”  It’s a very large flower that was carried both by celebrants and by bathed slaves who were to be sacrificed to Huitzilopochtli.  As one might guess by the name, it represented a warrior’s shield.  This is particularly fitting, as the bathed slaves who were offered to Huitzilopochtli during Panquetzaliztli were the vaguard merchants’ equivalent of captured warriors.  Instead of capturing them phyiscally on the battlefield, the vaguard merchants, who fulfilled military purposes as well as commercial, captured them with their wealth, which was likened to the spoils of war.  I’ve discovered that these merchants were almost a paramilitary order during the Aztec Empire, something quite fascinating which I will get around to writing about one of these days.

But what were they exactly?  Well, I’ll give you a couple of hints.  They’re huge, bright yellow, and their English and scientific names even reference a certain celestial body associated with Huitzilopochtli…

Yes, sunflowers.  Helianthus annuus to be specific.  At least, the sunflower is the species that’s the top choice for the chimalxochitl among scholars.  Dibble and Anderson identify the flower in footnote 7 on page 34 of their English translation of Book 9: The Merchants, of the Florentine Codex. It pays to read footnotes!

You might be wondering why Huitzilopochtli’s so fond of flowers.  Well, quite a few reasons.  Flowers in general were symbolic of blood and warriors who died in battle.  In Aztec poetry, one frequently encounters descriptions of rains of flowers on the battlefield, indicating the warriors in their bright regalia dashing about like blossoms swaying in the wind, eventually falling like cut plants and watering the earth with their blood.  The dead soldiers would then live forever in Huitzilopochtli’s paradise, the House of the Sun, where they would enjoy the scent and color of beautiful flowers.  Eventually they would be reborn as birds and butterflies, living leisurely lives flitting from flower to flower.

“Flower and song” was a phrase meaning sung poetry, a common pastime of warriors both alive and dead.  The “flowery death” was death on the sacrificial stone, and the “Flower Wars” were ritual battles to capture men for sacrifice.  Finally, the first flowers of the year were reserved for Huitzilopochtli’s mother, Coatlicue, and none might pick or smell them until She had been given some.

Anyway, I thought I would share my discovery and Panquetzaliztli-oriented thoughts on it, in the spirit of the season. 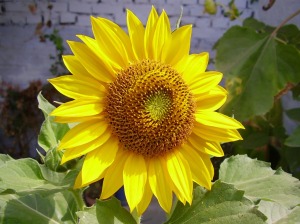 Photo taken by Wajid Uddaim and generously put into the public domain. Thanks Wajid! 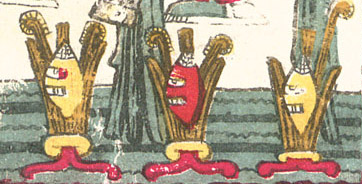