Watching the Hobbit in theatres last weekend got me thinking about riddles.  Not only are they amusing, but the figurative language and ideas contained within them can point to interesting tidbits of culture.  I’ve pulled a few of my favorites from the Florentine Codex and included them below, in slightly more informal language.  After each riddle and its answer I’ve added some of my own notes and interpretations of the concepts they nod to (the commentary is my own work, not that of Anderson and Dibble).

Mesoamerican cosmology divides the universe into sky and heavens (topan) above, the earth’s surface like a pancake or tortilla in the middle (tlalticpac), and the underworld (mictlan) below.  Though all three have their own distinct and separate characteristics, they interpenetrate to a certain degree, and this riddle hints at that in a playful manner.  The gourd itself is a product of the earth and its underworld powers, doubly so as it’s a water-filled plant (and is often likened to the human head), as is popcorn.  In fact, first eating corn is the moment where an infant becomes bound to the earth deities as it takes of their bounty and starts to accumulate cold, heavy “earthy-ness” within its being.  It’s also the start of a debt to the earth and vegetation gods — as They feed the child, one day that child will die and return to the earth to feed Them.  I covered some aspects of this idea in my Human Corn post, if you’re curious to read more.

Q: What’s the little water jar that’s both carried on the head and also knows the land of the dead?

A: The pitcher for drawing water.

The land of the dead is traditionally conceived of as a place dominated by the elements of earth and water, filled with cool, oozy dampness.  Rivers, wells, springs, and caves were places where the underworld power was considered to leak through to the mortal realm.  Not only did this power seep through to us, but we could sometimes cross through them to reach the underworld as well (the legendary Cincalco cave being one of the most famous of these doors).  Thus, thrusting the jar down into a watering hole or a spring, breaking through the fragile watery membrane, was sending it into Tlaloc and Chalchiuhtlicue’s world in a way.

Q: What lies on the ground but points its finger to the sky?

A: The agave plant.

The agave plant, called metl in Nahuatl and commonly referred to as a maguey in the old Spanish sources, is a plant loaded with interesting cultural associations.  Its heart and sap is tapped to produce a variety of traditional and modern liquors like pulque, octli, and tequila, linking it to the earth-linked liquor gods like Nappatecuhtli, Mayahuel, and even Xipe Totec and Quetzalcoatl in their pulque god aspects.  Additionally, each thick, meaty leaf is tipped with a long black spine that’s much like a natural awl.  This spine was one of the piercing devices used by priests and the general public alike to perform autosacrifice and offer blood to the gods.  Lastly, the beautiful greenish-blue color of the leaves of some species (like the blue agave), is the special color traditionally associated with beautiful, divine things.  Take a look at a photo of the respendent quetzal’s tailfeathers — they’re just about the same color as the agave.

Q: What’s the small mirror in a house made of fir branches?

The Aztecs strongly associated mirrors with sight and understanding.  Several gods, most notably Tezcatlipoca (the “Smoking Mirror”), possessed special mirrors that would allow them to see and know anything in the world by peering into them.  Some of the records we have  from before and during the Conquest record that some of the statues of the gods had eyes made of pyrite or obsidian mirrors, causing a worshipper standing before them to see themselves reflected in the god’s gaze.  In the present day, some of the tigre (jaguar) boxers in Zitlala and Acatlan wear masks with mirrored eyes, discussed in this post and video.  One last point on mirrors — in many of the huehuetlatolli (ancient word speeches), the speaker implores the gods to set their “light and mirror” before someone to guide them, symbolizing counsel, wisdom, and good example.  The comparison of eyelashes to fir branches is rather interesting, as it reminds me of the common practice in many festivals of decorating altars with fresh-cut fir branches.  The two elements combine to suggest a tiny shrine of enlightenment, the magic mirror nestled in its fragrant altar like a holy icon.

Q: What’s the scarlet macaw in the lead, but the raven following after?

I included this one simply because I thought it was exceptionally creative and clever.  I’m pretty sure it would stump even a master riddler like Gollum!

Aztecs At The British Museum

In the spirit of the aphorism “a picture is worth a thousand words,” I recommend stopping by the British Museum’s Aztec collection online. They have available 27 photographs (well, 26 if you ignore the crystal skull that’s been proven to be a hoax) of beautiful Aztec and Mixtec artifacts. Among them are statues of Quetzalcoatl, Tezcatlipoca, Mictlantecuhtli, Tlazolteotl, Tlaloc, Xochipilli, and Xipe Totec, as well as a rare mosaic ceremonial shield, a turquoise serpent pectoral, and a sacrificial knife. The images are thought-provoking and intense, as these objects speak wordlessly the vision of the Nahua peoples without Colonial censorship.

As a bonus, I located an excellent photograph of a jade mask of Xiuhtecuhtli, God of Time and Fire, which is a part of the British Museum’s collection but is not on their website. Thank you Z-m-k for putting your fine photography skills to work on this worthy subject material and for your kindness in sharing it under the Creative Commons Attribution Share-Alike 2.5 License. 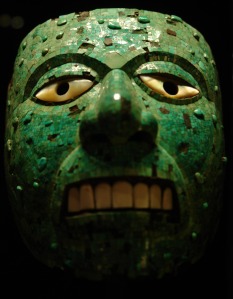