It’s the ending of the old baktun and the dawning of a new one, and I’d like to greet both the new era and the return of the Sun on this Winter Solstice with the blowing of conch horns!

The Aztecs named the conch shell trumpet quiquiztli, and the musicians who played them “quiquizoani.”  This is the instrument that Quetzalcoatl played to defeat the devious challenge of Mictlantecuhtli, the Lord of the Dead, and reclaim the ancestral bones of humanity at the start of the Fifth Sun.  I have seen some speculation that the “mighty breath” blown by the Plumed Serpent to set that newborn Sun moving in the sky was actually a tremendous blast on a conch horn.  It’s the trumpet the priests played to call their colleagues to offer blood four (or five) times a night in the ceremony of tlatlapitzaliztli, and also during the offering of incense, according to Sahagun in the Florentine Codex .  Tecciztecatl, the male Moon God, is sometimes depicted emerging from the mouth of a quiquiztli.  The sound of the instrument itself was considered by the Aztecs to be the musical analog to the roar of the jaguar.  Like the twisting spiral within the shell, the associations are nearly endless, doubling back on each other in folds of life, death, night, dawn, and breath.

The quiquiztli appeared in two offerings at the Templo Mayor in Tenochtitlan (offering #88).  One shell was found on Tlaloc the Rain Lord’s side (not at all surprising, given the overwhelming watery connotations of the instrument).  A second one was found on Huitzilopochtli’s side of the manmade replica of Coatepetl.  If you would like to actually hear one of these very trumpets being played, you can click HERE to visit the International Study Group on Music Archaeology’s page for these trumpets.  You can directly download the MP3 recording by clicking HERE.

I also found a beautiful photograph of an Aztec or Mixtec conch trumpet (covered in intricate carvings) currently in the holdings of the Museum of Fine Arts here in Boston.  If you’d like to view the photo and see their notes on the artifact, please click HERE.  If you’d rather jump right to the full-size, more detailed image, click HERE instead.

Want to learn more about the trumpet and its uses in Mesoamerican cultures past and present?  Head on over to Mixcoacalli and read Arnd Adje Both’s excellent 2004 journal article called “Shell Trumpets in Mesoamerica: Music-Archaeological Evidence and Living Tradition” (downloadable full text PDF).  It gives a valuable introduction to the instrument in Teotihuacan, Aztec, and Mayan societies and includes numerous interesting photos and line sketches as a bonus.  I couldn’t find a direct link to the article on his site, but I did find it on his server via Google.  As a courtesy, the link to his homepage is here.  There is some other interesting material relating to the study of ancient Mesoamerican music on there, so I recommend poking around.

What about South American cultures?  I’m a step ahead of you — why not go here to read an interesting article on Wired about a cache of 3,000 year old pre-Incan shell trumpets found in Chavin, Peru?  Includes recordings and photos.

Finally, if you’re curious for an idea of how the Aztecs and Maya actually played the quiquiztli, including how they changed the tone of the instrument without any finger-holes or other devices, you can view a demonstration by ethnomusicologist John Burkhalter below.  If you noticed that the trumpeter in the codex image I embedded earlier has his hand slipped into the shell, you’ll get to see what that actually does when the horn is played in the video.

Colloquies Of The Twelve

I have quite the research treat for you tonight, dear reader!  After quite some time patiently hunting and following threads (and guessing the correct URL behind a broken link when one last barrier tried to put an end to my quest), I successfully tracked down the only English, full-text translation of an important Conquest-era work… the Colloquios y doctrina christiania (“Dialogues and Christian Doctrine”), often known to English speakers by its nickname “The Colloquies of the Twelve.”

The bilingual Nahuatl/Spanish text dates to about 1564 and was penned by Fray Bernardino de Sahagún.  The work concerns itself with recording a series of debates between Mexican religious and political authorities and a team of twelve friars sent by the Spanish crown to attempt to destroy the indigenous faith.  These verbal battles took place in the early 1520’s, shortly after the fall of the Aztec empire.  While Sahagún didn’t reach Mexico until 1529 and thus was a few years too late to have witnessed these discussions himself, he did consult ten out of twelve of the friars, as well as four Mexica informants and four eminent native scholars (Antonio Valeriano, Alonso Vegeriano, Martin Jacobita, and Andres Leonardo), in order to reconstruct the debates (albeit in a highly-poetic and dramatic form).

The lone surviving manuscript was lost for over three hundred years until it was rediscovered in the Vatican archives in the early twentieth century.  Sadly, of the thirty chapters, only fourteen have endured the ravages of time.  It received a German translation by Zelia Nuttall in the 1940’s, but remained untranslated into English until 1978, thanks to the effort of Jorge Klor de Alva (the first complete modern Spanish translation was executed by Miguel Leon-Portilla in 1977).  Its first and only publication was in the final issue of Alcheringa: Ethnopoetics, Volume Four, Number Two, published by Boston University in 1980.  This printing is the one I present you with today.

Click HERE to access the downloadable PDF containing the Colloquies of the Twelve at Alcheringa’s online archive.

I also recommend poking around in other volumes in Alcheringa’s archives, as they have quite a bit of interesting stuff back there, including more Mesoamerican research and several recordings of indigenous poetry recitations.  Thumbs up to Boston University for releasing these archives to the public, including the audio recordings that came with issues of this journal.

Book of the Colloquies; The Aztec-Spanish Dialogues of 1524. English edition translated and edited by Jorge Klor de Alva. Alcheringa/Ethnopoetics vol 4, no. 2:52—193.  1980.

Ballads of the Lords of New Spain & the Cantares Mexicanos

Fantastic news!  I recently picked up a copy of John Bierhorst’s English translation of the Ballads of the Lords of New Spain (better known as the codex Romances de los Señores de la Nueva España), and discovered a note in the prefatory material of great interest.  The University of Texas and Stanford University have completed an incredibly generous project, something that I’ve been hoping someone would do for years.  Enough suspense, I’ll tell you what it is now.

Complete, full-text copies of both the Romances and the Cantares online, complete with commentary and material for comparative study of the two song texts, a Nahuatl-English concordance dictionary, relevant photos and scans from various codices relating to poetry and music, and even audio of performances of some of the actual sixteenth-century drum rhythms intended for the teponaztli, or wooden slit drum, based on the only piece of sheet music preserved recording actual Aztec music.

Folks, this is a huge deal, I can’t state it strongly enough.  This is the vast majority of pre-Conquest and early Colonial Aztec poetry and song that has been preserved, in English and Nahuatl, searchable and complete, available for absolutely free, for the first time ever.  Most of this material has previously been extremely difficult to get a hold of or flat-out unavailable (no complete English edition of the Romances existed before 2009), not to mention expensive.  I own a near-mint paper copy of Bierhorst’s translation of the Cantares Mexicanos, which was produced in a limited run by Stanford University and has been out of print since 1985.  It took me almost two years of scanning numerous international book selling services online to eventually secure a copy for under $250.  You will never have to go through this difficulty and expense to study this collection of breathtakingly-beautiful poetry, as Stanford University has generously put a full copy of the Cantares Mexicanos on this same website in PDF format, that you can download for free.

Go HERE to the home page of the Ballads of the Lords of New Spain!

And go HERE to download a full PDF copy of the Cantares Mexicanos!

Also HERE for a full PDF copy of the Nahuatl-English Concordance & Dictionary volume for the Cantares Mexicanos!

Finally, go HERE for a list of post-publishing corrections to the Cantares!

In short, many thanks to the University of Texas, Stanford University, and Mr. Bierhorst for making this amazing resource available to all, it’s a move reminiscent of the great wave of public library and museum foundings in the USA in the 19th and early 20th centuries that have been such a force for learning and research.  To my readers, I highly encourage you to pick up a print copy of the Ballads in order to support more projects like these in the future, and to give back to those involved in this one.  Besides, it’s just nice to have a physical copy of a good book to curl up with.

I’ll be back to discuss these two works of Aztec poetry and song later on, but I just couldn’t wait to share these books with you now.  Happy reading! 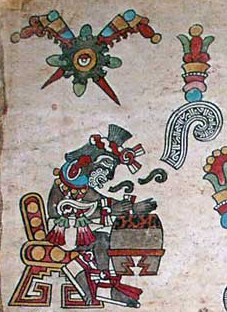 Flower and Song, Plate 2 of the Codex Borbonicus

All links updated & more materials uploaded by U.Texas linked on 2/24/2013, courtesy of an alert reader.  Thanks M.P.!